Fans, friends, and family got together recently to celebrate the 50th anniversary of British comedy troupe Monty Python, as well as the 40th anniversaries of both Monty Python's beloved classic film The Life Of Brian and HandMade Films, the production company set up by Beatle George Harrison to tell the tale of Brian, Jesus' less successful neighbor. 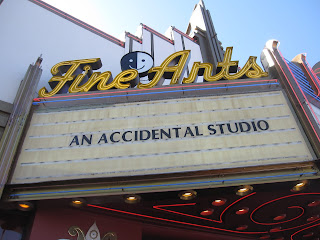 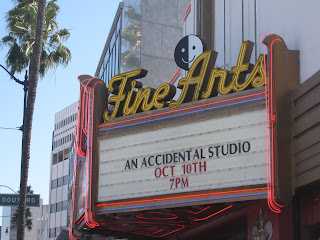 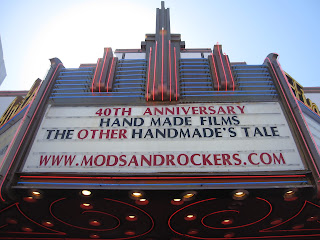 Sixteen of the 23 HandMade films for which Harrison served as executive producer, will be screened at a special festival called The (Other) HandMade's Tale, brought to us by the Mods and Rockers (which is marking its 20th anniversary) at the Fine Arts in Beverly Hills.

George Harrison loved Los Angeles, and lived there off and on, so it was appropriate for some of his friends and fans to gather October 7th to kick off the anniversary celebrations at the mmhmmm bar at The Standard Hotel on Sunset.

Pete Townshend, Kathy Bates, Tim Rice, and Peter Asher were among the guests at the party hosted by Martin Lewis, founder/producer of the Mods And Rockers and instigator of the Python/HandMade celebrations, Mike Medavoy (who got Warner Brothers to buy the American distribution rights to Brian), and Python producer John Goldstone.

Goldstone, with Python's Eric Idle, got Harrison to fund the film with a $5 million mortgage of Harrison's beloved Friar Park estate in the UK. Eric Idle called it "the most anybody's ever paid for a cinema ticket in history"). 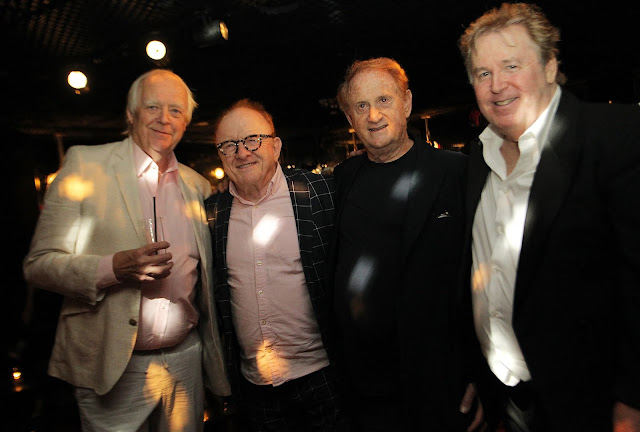 The tale of HandMade Films is told in the new documentary, also presented at the festival, called An Accidental Studio, directed by Bill Jones (son of the late Monty Python Terry Jones) and Ben Timlett. 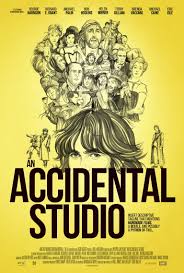 Trailer for "An Accidental Studio" 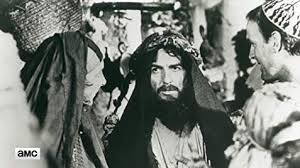 Harrison's cameo in Life Of Brian

The story of George, Eric, and "Life of Brian", as told by Python's John Cleese to Seth Meyers in 2018:


Many people who worked with George over the years attended the party at The Standard, including drummer Jim Keltner and HandMade executive Linda Arias (George's sister-in-law).

Also attending were some relatives of well-known fans and friends of Harrison and/or The Pythons, such as Rebecca Brando (daughter of Marlon Brando), Terry Gilliam's brother Scott Gilliam, and artist George DiCaprio, father of the actor and environmental activist Leonardo DiCaprio.

George DiCaprio is working on a documentary about his late friend, psychedelic pioneer Timothy Leary. DiCaprio, a painter and underground comic artist, got to know Leary after he moved to Los Angeles, where he spent most of his final twenty years and where he died in 1996. (A docu-drama about Leary, starring Woody Harrelson, is also currently in the works by another team.)

George DiCaprio spoke of his love for the legendary British radio comedy The Goon Show (1951 - 1960, featuring Peter Sellers and Spike Milligan), the kind of humor which inspired Monty Python, The Rutles, and is also reflected in The Beatles' comic sensibility in A Hard Day's Night, their hilarious early press conferences, and their Christmas Fan Club records. 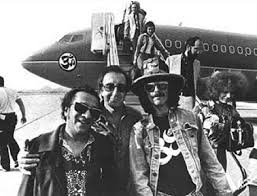 Heroes Of Comedy: The Goons

DiCaprio said his son sent his regrets on not being able to attend, since he had such great respect for both George Harrison and Monty Python. DiCaprio recalled that he and his son knew several Python scenes and skits by heart, and used to crack each other up performing them and singing Monty Python songs together.  He even offered a bit of this classic at the party: 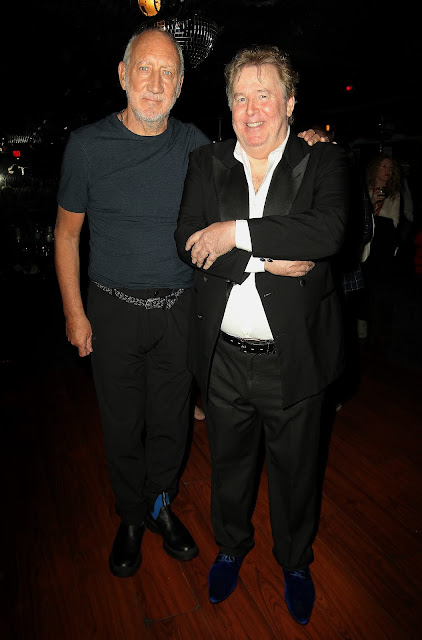 Among the high-profile guests was The Who's Pete Townshend, a long-time friend of Martin Lewis. The Who are currently touring the U.S., and will release a new album in December. Townshend came to the party with his wife, composer Rachel Fuller. 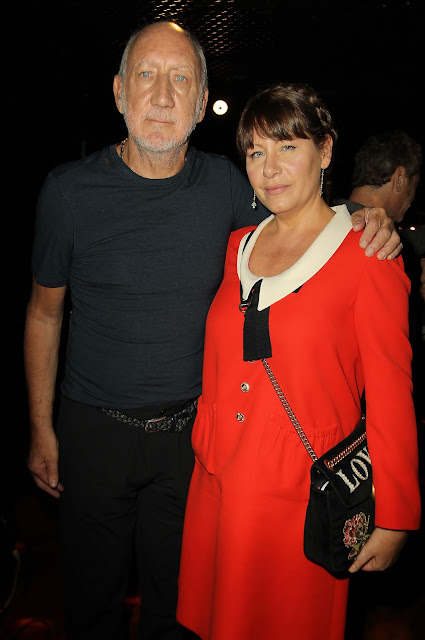 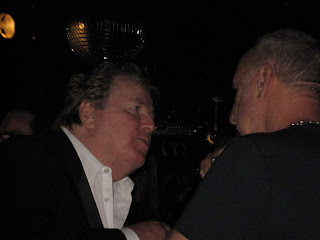 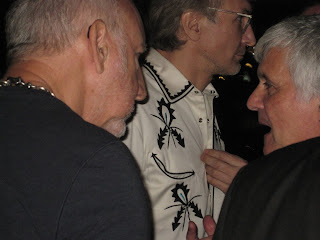 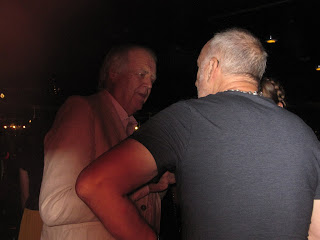 Party goers were fortunate to see a casual chat between the creators of the two greatest British rock operas of all-time: Tim Rice - Jesus Christ Superstar and Pete Townshend - Tommy. Of course Tim Rice is also known for Evita, The Lion King, and so much more. Several guests stopped by to thank them for the music they grew up on. 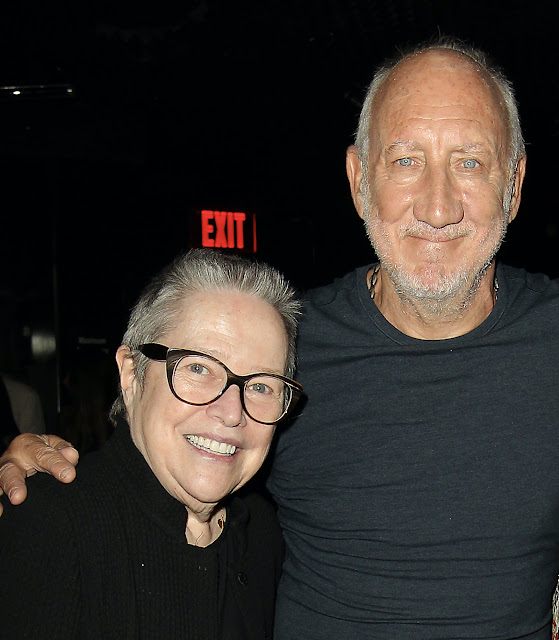 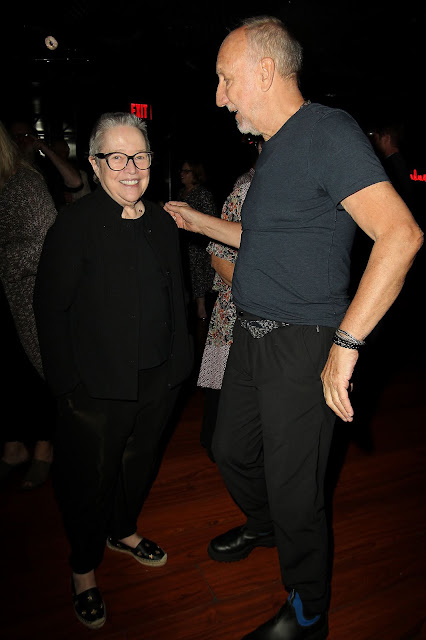 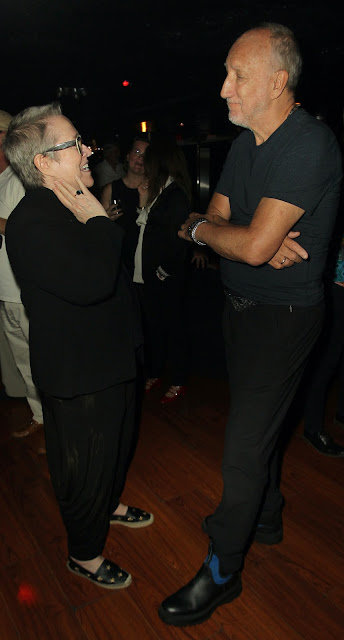 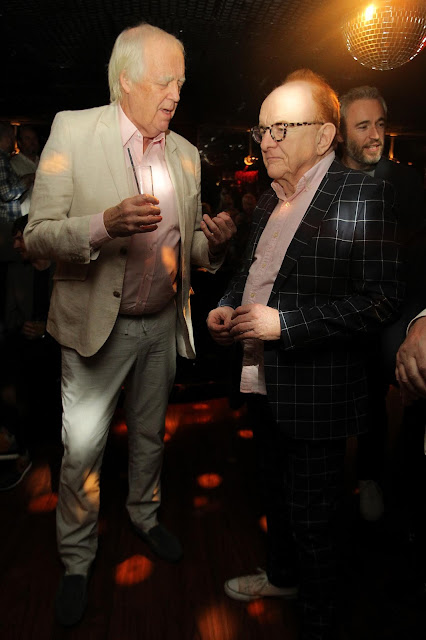 
After some remarks by John Goldstone and Martin Lewis, we were treated to a special performance of some classic Harrison songs by an all-star band of musicians, each of whom had who with Harrison on occasion - specially assembled for the night by Lewis.

"While My Guitar Gently Weeps"

(Technical glitches prevent us from sharing the ThisSmallPlanet video for "Guitar Gently Weeps". It was an excellent performance and can be found elsewhere on social media.) 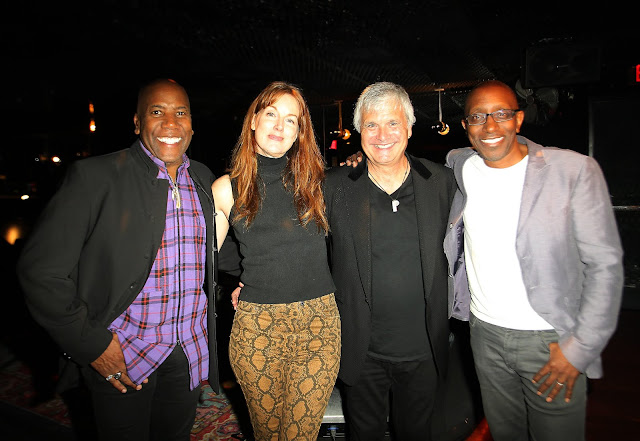 Kathleen "Bird" York, the lead singer of The Springtimers, the all-star band assembled specially for the occasion, appeared in the HandMade Film Checking Out with Jeff Daniels. The film was produced by George, who did one of his Hitchcock-like cameos in the film as a janitor.

Bird is an actor, singer, songwriter, and screenplay writer. She appeared as Andrea Wyatt on The West Wing (2000 - 2006), and as Officer Johnson in Crash (2004), for which she also composed and sang the Oscar-nominated theme song "In The Deep".


Laurence Juber, is a guitarist and a film/TV composer and arranger who played in the last incarnation of Paul McCartney's Wings. He has just released a new solo album. 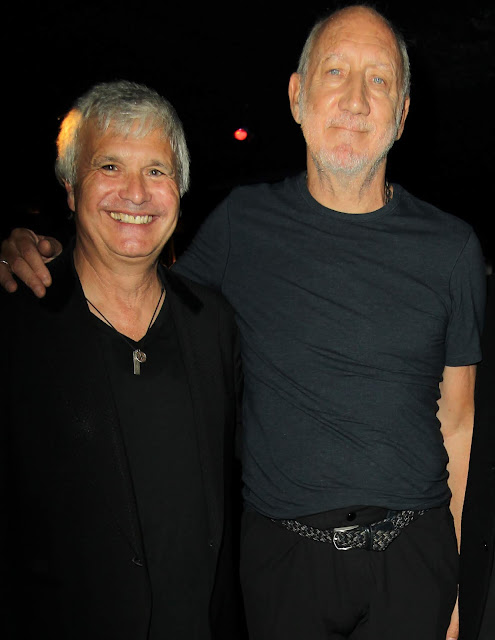 The extraordinary keyboardist Greg Phillinganes also has a new album out. 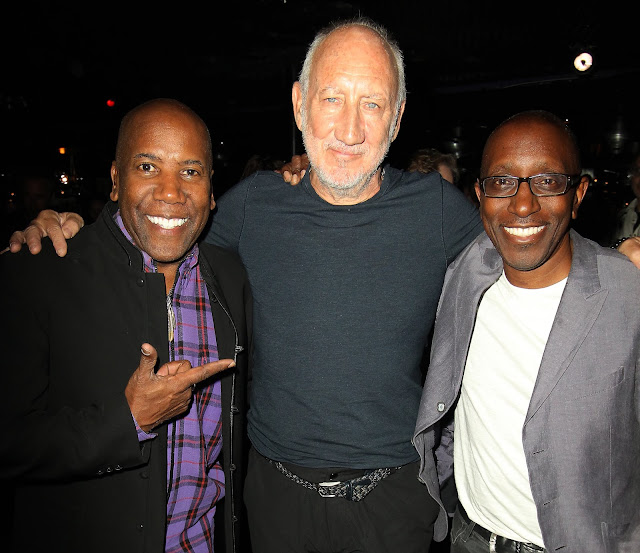 Nathan, Pete, and Greg at the party

Greg and bass player Nathan East toured with Harrison, as well as Eric Clapton and Phil Collins, among many other high-profile musicians. 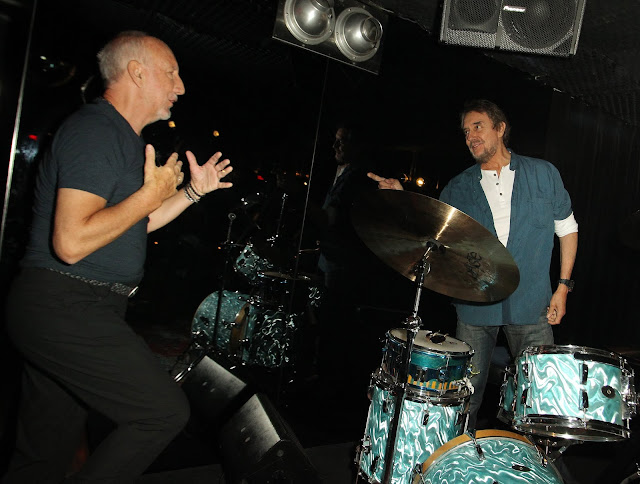 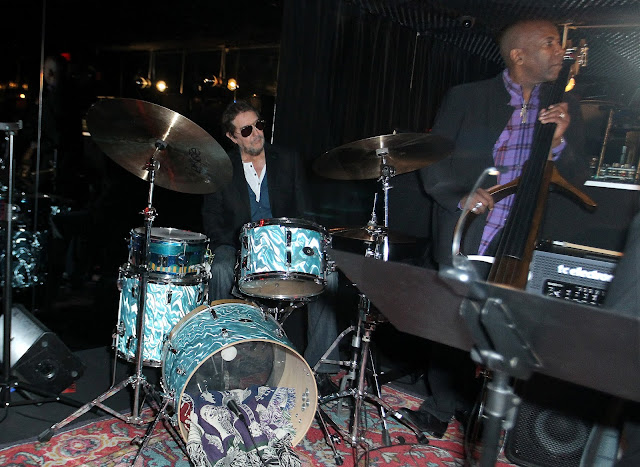 The legendary drummer Jim Keltner completed the line-up. In the 1970s, he became the go-to drummer for both Harrison and Lennon when Ringo wasn't available. He appeared on one of my favorite albums of all-time: The Traveling Wilburys, featuring Harrison, Dylan, Tom Petty, Roy Orbison, and ELO's Jeff Lynne.

George Harrison had a strong presence at the party. His music playing on the sound system, and George-themed videos were being projected in the lobby from various concerts, including the memorial Concert For George. Some attendees had attended the memorial concert (and a few had performed at it) and many were taken away by the memories of what George had meant to them, and still means to them, especially on a night like this.


Looking at the big picture, HandMade is widely credited with having revitalized the British film industry at a crucial time in the 1980s and with helping launch and sustain the careers of actors and filmmakers such as Helen Mirren, Maggie Smith, Neil Jordan, and Bob Hoskins (pictured here with Harrison). Harrison made several cameos in HandMade films, including a role as a nightclub singer in Shanghai Surprise, for which he recorded five new songs. The film starred Madonna and then-husband Sean Penn but was a box-office disappointment. 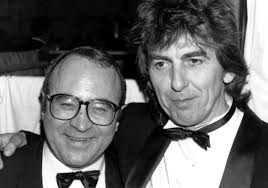 Eric Idle and Neil Innes famously parodied The Beatles as The Rutles, starting in 1978, with Harrison's enthusiastic support.

It might be hard for us today to imagine the controversy stirred by Life Of Brian at the time - some thought it was blasphemous and excessively irreverent toward Christianity - but this video with Tim Rice (who was at The Standard party) and Python members reminds us of what they were up against at the time:

Martin Lewis expressed his belief at the party that George Harrison also doesn't get sufficient credit for how his 1971 Concert for Bangladesh inspired the plethora of benefit concerts for political and social issues that proliferated in the 1970s, ‘80s and ‘90s – such as 1985’s Live Aid.  By way of example, he cited Harrison’s 1971 charity concert as the primary inspiration for the “Secret Policeman’s Ball” series of benefit shows, albums and movies he produced for Amnesty International starting in 1976.

The first minute of this mini-doc underscores how Harrison's pioneering Bangladesh concert inspired other benefit shows:


Ultimately the message of Monty Python and their friend and patron George Harrison is contained here:

Another Sad Post Script: Terry Jones, a founding member of Monty Python, passed away In January.

Bill, with his longtime creative partner Ben Timlett, directed and produced the aforementioned documentary An Accidental Studio, which tells the entire tale of HandMade Films... including its immaculate conception at the hands (and naughty bits!) of Monty Python and George Harrison! 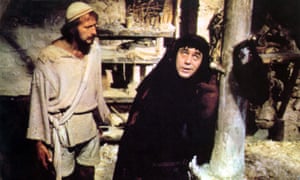 Posted by thissmallplanet at 1:22 PM