Posted by thissmallplanet at 8:54 AM No comments:
Email ThisBlogThis!Share to TwitterShare to FacebookShare to Pinterest


Posted by thissmallplanet at 7:58 AM No comments:
Email ThisBlogThis!Share to TwitterShare to FacebookShare to Pinterest

Give a Dollar to Madonna's Homeless Brother 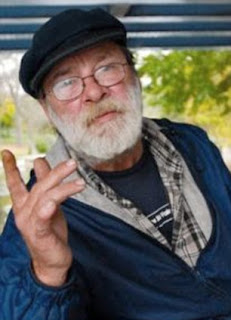 Anthony Ciccone, brother of pop star Madonna, is homeless in their home state of Michigan this winter. We ARE our brother's keeper. Since Madonna is too cheap or cruel to help a brother out, let's you and I help him instead!

from The Daily Mail (UK):

'My family turned their back on me': Madonna's big brother, 55, on his plight  sleeping rough under a bridge

On the street: Madonna's eldest brother Anthony Ciccone is homeless in Michigan
While Madonna flits between fabulous homes with the African children she rescued from poverty, her own eldest brother is destitute and sleeping rough.
Anthony Ciccone, 55, says he has been living under a river bridge in Michigan for 18 months, his only shelter a sleeping bag and his sole companion another street dweller named Michael.
Mr Ciccone said he had been among the homeless in the ski resort of Traverse City since losing a job at his father’s vineyard and winery six miles away.
‘My family turned their back on me, basically, when I was having a hard time,’ he said. ‘You think I haven’t answered this question a bazillion times – why my sister is a multi-bazillionaire and I’m homeless on the street? Never say never. This could happen to anybody.’
Mr Ciccone said it made him angry when some thought it funny that the brother of such a famous star should end up living under a bridge.
But while providing him with financial help would barely scratch 53-year-old Madonna’s £400million-plus fortune, he is adamant that he wants none of her money – whether it is offered or not.
‘I’m not looking to get a free handout because of my sister,’ he said. ‘I’m not looking for any publicity.’ He instead relies on the generosity of soup kitchens run by local churches for food.
Mr Ciccone, who claimed he once worked in Alaska’s fishing industry and as a  photographer’s assistant in New York, now makes a few dollars doing odd jobs and collecting bottles and cans from people’s dustbins.

Jet-set lifestyle: Madonna arrives at JFK Airport in New York today with members of her entourage

Madonna was born in 1958 to Madonna Louise Ciccone, a French Canadian, and Silvio ‘Tony’ Ciccone, an Italian American engineer with General Motors and Chrysler. The family lived in a small brick house in Pontiac, Michigan.
They have claimed that they were not poor but ‘lower middle-class’.

Apart from Anthony, Madonna has four direct siblings – Martin, a failed rapper, Paula, a dancer and singer, Christopher, an interior designer and artist, and Melanie, a music publicist.
Their mother died of cancer in 1963, and a few years later their father married their housekeeper Joan Gustafson and had two more children –  Jennifer, thought to be a human resources consultant, and music PR Mario. In 1995, Tony set up the Ciccone Vineyard in Sutton’s Bay. He produces  wine named after his famous daughter.

Glamour: Madonna at the premiere of W.E., the film she directed, in London at the weekend
Madonna, who has two children and controversially adopted two young Malawians, has had a difficult relationship with her siblings.
In 2008, Christopher published a damning book about his life working for her, portraying her as self-obsessed, manipulative and so imperious she expected to spit out her cough drops into his hand.
‘I think, ultimately, she’s a lonely person and, unfortunately, it truly is lonely at the top,’ he said. Another brother, Martin, has suffered from alcoholism.
Although the star reportedly paid for some of his rehab treatment, she did not invite him to her 2000 wedding to Guy Ritchie, supposedly worried that he would sell his story to the media.
Anthony has refused to say how he ended up destitute but local people describe him as ‘friendly’ and ‘coherent’, showing no signs of any drink or drug problems.
Madonna has not commented on Anthony, while their father also declined to discuss him yesterday.
■ A stalker who broke into Madonna’s London home was locked up indefinitely yesterday after doctors found he posed a ‘serious risk’ to her.
Grezgorz Matlok, a schizophrenic 30-year-old, was detained after breaking into the singer’s £10million townhouse and rifling through her bedclothes.
The Polish national, who also broke into the home of Madonna’s ex-husband Mr Ritchie and helped himself to cigars before trying on his clothing, was also given a restraining order.
He was banned from contacting Madonna or her family, or visiting any of their properties.
The court heard how the star had feared for her own and her children’s safety after the break-in.
Matlok was spared deportation because of what was described as his ‘great desire’ to return to Poland once he is well.

Cold comfort: Anthony Ciccone sleeps beneath this bridge with a friend in Traverse City, Michigan

Life of luxury: Madonna's extensive home and gym in London is just one of the properties in her multi-million dollar portfolio

Read more: http://www.dailymail.co.uk/news/article-2053026/Madonnas-big-brother-Anthony-Ciccone-sleeping-rough-river-bridge.html#ixzz1bzYjXN3e
Posted by thissmallplanet at 7:21 AM No comments:
Email ThisBlogThis!Share to TwitterShare to FacebookShare to Pinterest

Posted by thissmallplanet at 4:59 AM No comments:
Email ThisBlogThis!Share to TwitterShare to FacebookShare to Pinterest

Posted by thissmallplanet at 6:50 AM No comments:
Email ThisBlogThis!Share to TwitterShare to FacebookShare to Pinterest

http://killthatcat.com/2011/10/husker-du-september-5th-1981/
Posted by thissmallplanet at 5:40 PM No comments:
Email ThisBlogThis!Share to TwitterShare to FacebookShare to Pinterest

Posted by thissmallplanet at 5:20 PM No comments:
Email ThisBlogThis!Share to TwitterShare to FacebookShare to Pinterest

ABOUT OUR HOST
Having escaped the controversial Children of God cult when he was 16, singer-guitarist Christopher Owens, 32, has no shortage of fascinating stories — so many, in fact, that he says he often leaves  dinner parties feeling like the TMI guy. His  confessional style extends to Girls' shoegazing  second album, Father, Son, Holy Ghost (True  Panther), a gorgeous collection of heartbreak  gospels. Take "Vomit," for example, which describes Owens' search for his abusive ex-girlfriend. "There's a Bible verse that says, 'As a dog returns to his vomit so a fool repeats his folly,' " Owens explains. "It's about codependency. All the songs are written in a moment of becoming overwhelmed."
Shot for SPIN in San Francisco, August 29, 2011
http://www.spin.com/articles/my-room-tour-christopher-owens-girls-san-fran-pad?utm_source=spinfacebook&utm_medium=social&utm_campaign=spinfacebook
Posted by thissmallplanet at 1:55 PM No comments:
Email ThisBlogThis!Share to TwitterShare to FacebookShare to Pinterest
Newer Posts Older Posts Home
Subscribe to: Posts (Atom)