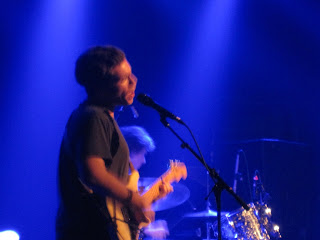 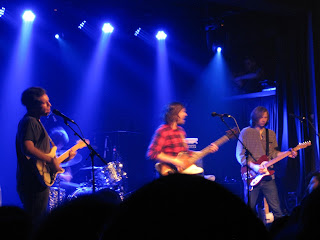 Andrew, his brother Max on drums, Sean on bass, Austin 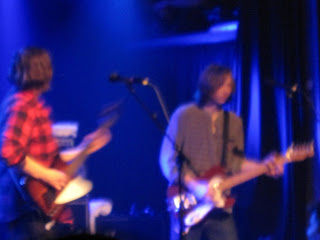 It was Sean's 30th birthday! 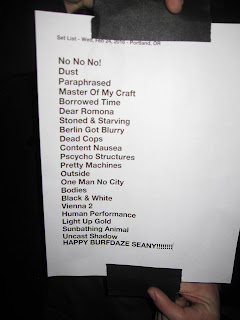 Parquet Courts played a great show at the Wonder Ballroom in Portland. They played a number of songs from their first album and other previous releases, as well as a bunch of new stuff.

Their new songs are interesting, but the crowd seemed to respond best to songs from the first album, 2012's Light Up Gold (if you don't count their cassette-only debut).

The epic "Stoned And Starving" was greeted enthusiastically, and the band unleashed a mighty performance of it, beginning with Austin's Hendrix snippet (not captured on the video, unfortunately). Austin seems to be taking a more active role in the group, frequently chatting with the crowd between songs, doing many guitar leads, a few lead vocals, and even a smattering of keyboards, playing it with the neck of his guitar at one point in the new single "Dust".... "Dust is everywhere.... Sweet!" He nicely compliments guitar genius Andrew Savage, who appeared to be the de facto leader when the band first started.

We always knew Parquet Courts had two great guitarists. now it's just a little more obvious. That's their secret weapon - two guitarists who aren't afraid to do improv and long solos and who are quite creative with both what they play individually and how they blend it together.

Malkmus said the first time he heard them, he thought it actually was Pavement. The great thing about Parquet Courts is that they take their influences (their wild guitars, their absurdist lyrics) and take them to another level for a new generation.

Posted by thissmallplanet at 12:36 AM No comments:
Email ThisBlogThis!Share to TwitterShare to FacebookShare to Pinterest

Posted by thissmallplanet at 5:32 AM No comments:
Email ThisBlogThis!Share to TwitterShare to FacebookShare to Pinterest
Newer Posts Older Posts Home
Subscribe to: Posts (Atom)