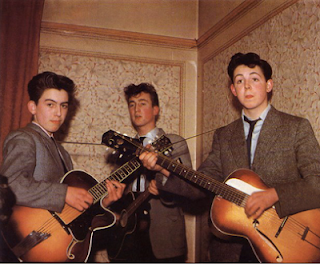 Posted by thissmallplanet at 10:16 AM No comments:
Email ThisBlogThis!Share to TwitterShare to FacebookShare to Pinterest

Sam Beam's Iron & Wine are back with their follow-up LP to 2011's Kiss Each Other Clean. Ghost on Ghost is out April 16 in the U.S. via their new label home, Nonesuch. (It's out on April 15 via 4AD in Europe, Japan, Australia, and New Zealand.) Below, check out the band's first offering from the album, "Lovers' Revolution".
The album was produced by Brian Deck, who has worked extensively with Iron & Wine in the past. The album cover, pictured above, is by photographer Barbara Crane, from her series "Private Lives". Musicians on the album include Rob Burger of Tin Hat Trio, Steve Bernstein, Tony Scherr, Kenny Wollesen, and Briggan Krauss of Sex Mob, jazz drummer Brian Blade, trombonist Curtis Fowlkes of the Jazz Passengers, bassist Tony Garnier (Bob Dylan's band), cellist Marika Hughes, Maxim Moston and Doug Wieselman of Antony and the Johnsons, and Anja Wood.
In a press release, Beam said that his previous two albums contained an "anxious tension" that he wanted to move away from. "This record felt like a reward to myself after the way I went about making the last few."
Iron & Wine are planning to tour throughout the year-- dates will be announced soon.
Ghost on Ghost:
01 Caught in the Briars
02 The Desert Babbler
03 Joy
04 Low Light Buddy of Mine
05 Graces for Saints and Ramblers
06 Grass Windows
07 Singers and the Endless Song
08 Sundown (Back in the Briars)
09 Winter Prayers
10 New Mexico's No Breeze
11 Lovers' Revolution
12 Baby Center Stage
Watch Iron & Wine cover Johnny Cash's "Long Black Veil":
Posted by thissmallplanet at 7:08 AM No comments:
Email ThisBlogThis!Share to TwitterShare to FacebookShare to Pinterest

New Miles Kane Video "Give Up"

Posted by thissmallplanet at 3:42 AM No comments:
Email ThisBlogThis!Share to TwitterShare to FacebookShare to Pinterest

Jim James, May 14, Crystal Ballroom
Father John Misty, May 25, Wonder Ballroom
Posted by thissmallplanet at 5:22 PM No comments:
Email ThisBlogThis!Share to TwitterShare to FacebookShare to Pinterest

Jim James, 'Regions Of Light And Sound Of God'

Hear Individual Tracks From The Album

Enlarge image
Jim James' Regions of Light and Sound of God comes out Feb. 5.
Neil Krug/Courtesy of the artist
With My Morning Jacket, Jim James presides over a band whose only consistent characteristic is bigness, whether its members are raging through arena-sized rock 'n' roll, soaring like a choir or indulging a mile-wide playful side, with room for stomping funk, angelic ballads and everything in between. So it makes sense that, for his first solo album — not counting the gorgeous EP of George Harrison covers he recorded under the not-so-mysterious pseudonym Yim Yames — James would shrink his canvas down to where it captures the sound of a lost soul in search of something bigger than himself.
On Regions of Light and Sound of God, out Feb. 5, James conveys a kind of ringing plaintiveness: He's always liked to let his voice sound as if it's echoing into the void, but here, his attention seems to face inward instead of heavenward. Inspired by an 80-year-old book of woodcut art called A God's Man — which tells the dark story of an artist's redemption and lingering demons — James takes a similarly lonely journey on Regions of Light, on which he plays every instrument himself.
Regions of Light and Sound of God doesn't want for thematic ambition: It finds James unselfconsciously name-dropping both God and Dr. Martin Luther King Jr. Still, the album is at its best when James seems content to articulate the tender musings of a lonely mind. For all his grandiose ambitions, smallness suits him, too.

Jim James, 'Regions Of Light And Sound Of God'

Of The Mother Again

Posted by thissmallplanet at 4:43 AM No comments:
Email ThisBlogThis!Share to TwitterShare to FacebookShare to Pinterest
Newer Posts Older Posts Home
Subscribe to: Posts (Atom)