Posted by thissmallplanet at 11:19 AM No comments:
Email ThisBlogThis!Share to TwitterShare to FacebookShare to Pinterest

Irish blues-rocking sensations The Strypes made their second Northern California appearance in recent times, both times to enthusiastic sold-out crowds.

After playing a remarkable set of retro rock and blues, they stunned the crowd with covers of The Ramones' Rockaway Beach and the garage classic Louie, Louie.

Later, they stayed and chatted with fans, posing for pictures and signing CDs. Seemed like such nice guys. Great to see them have success now in America, having already made a name for themselves in Ireland, England, and beyond. 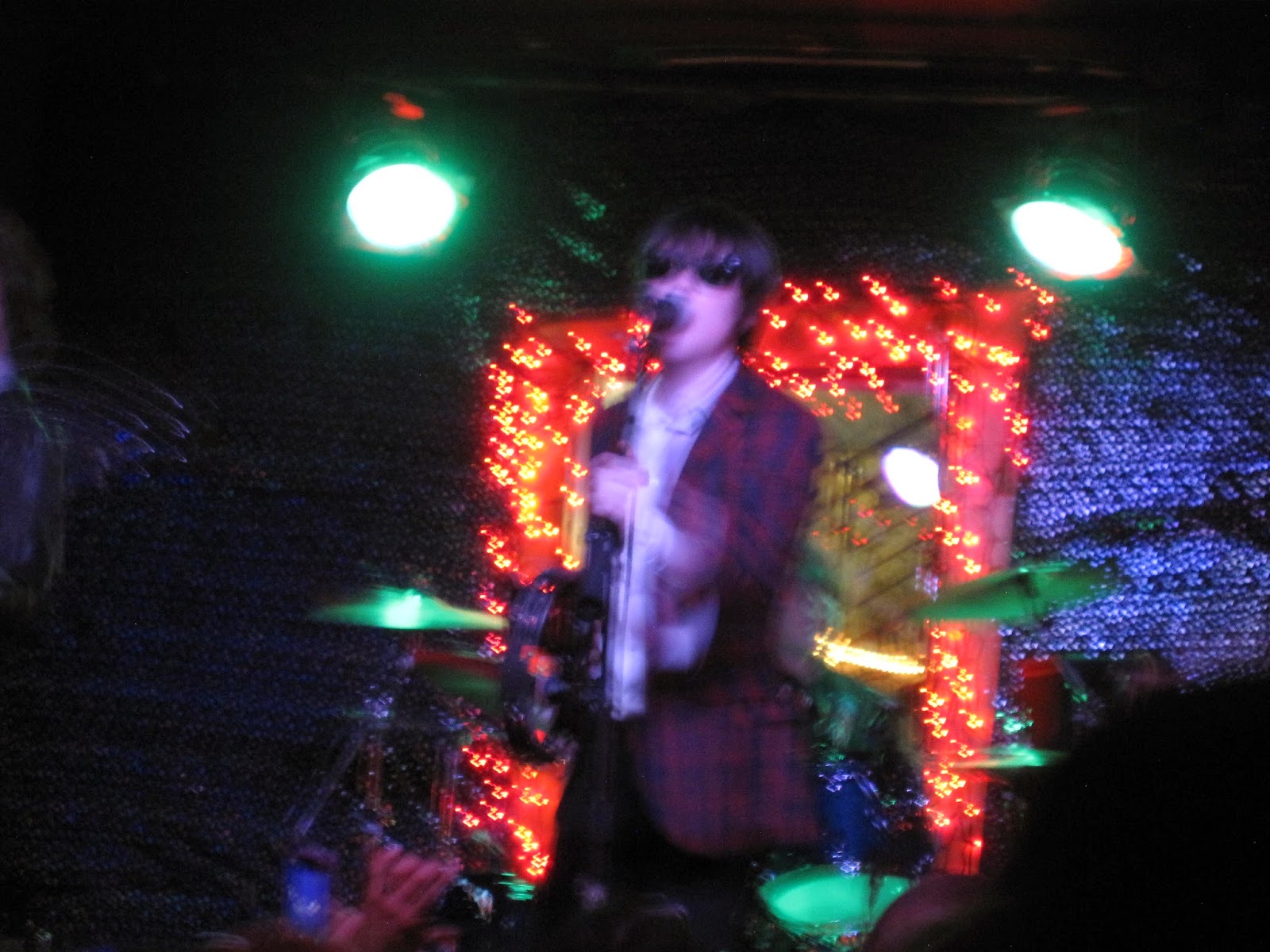 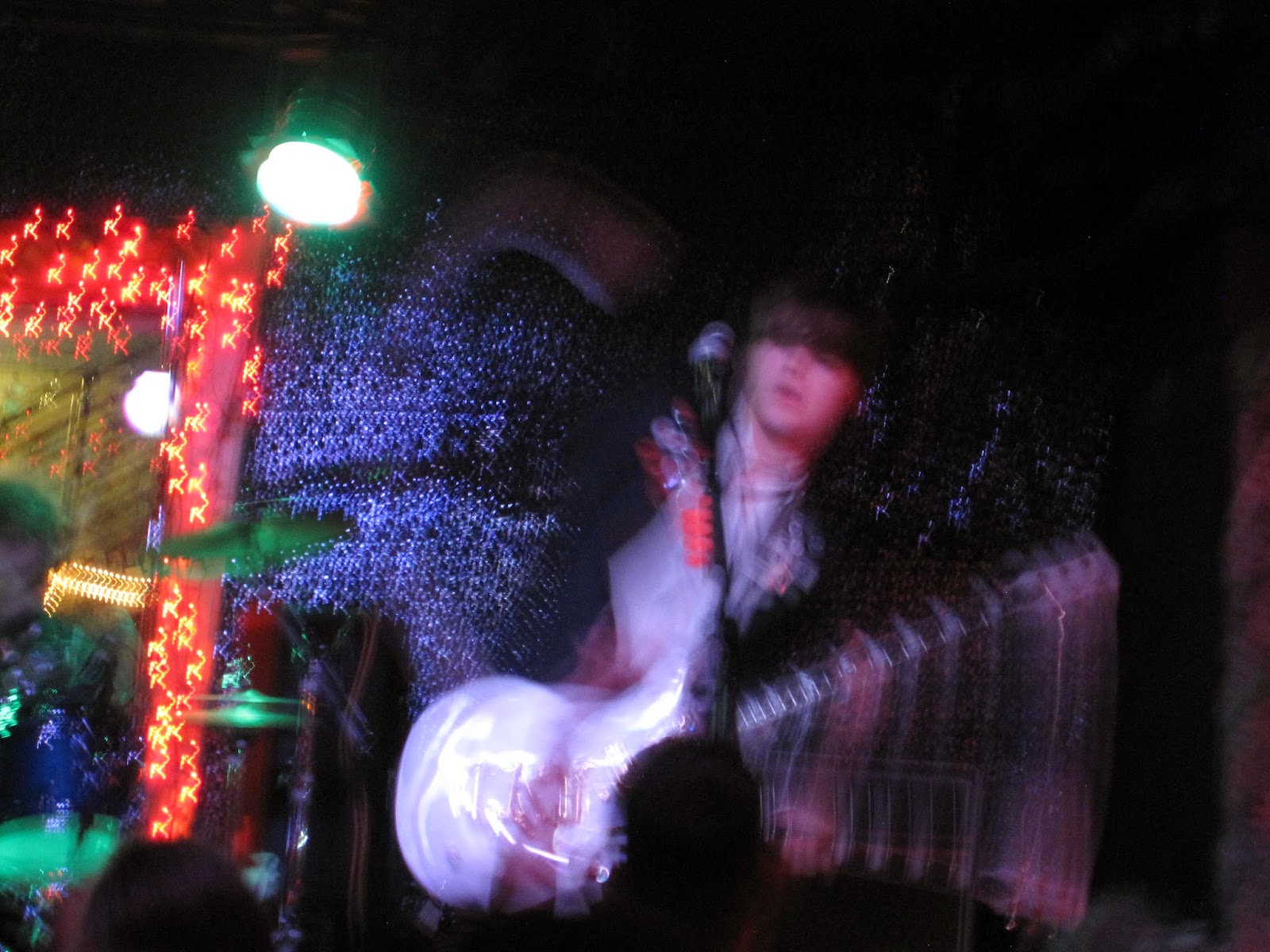 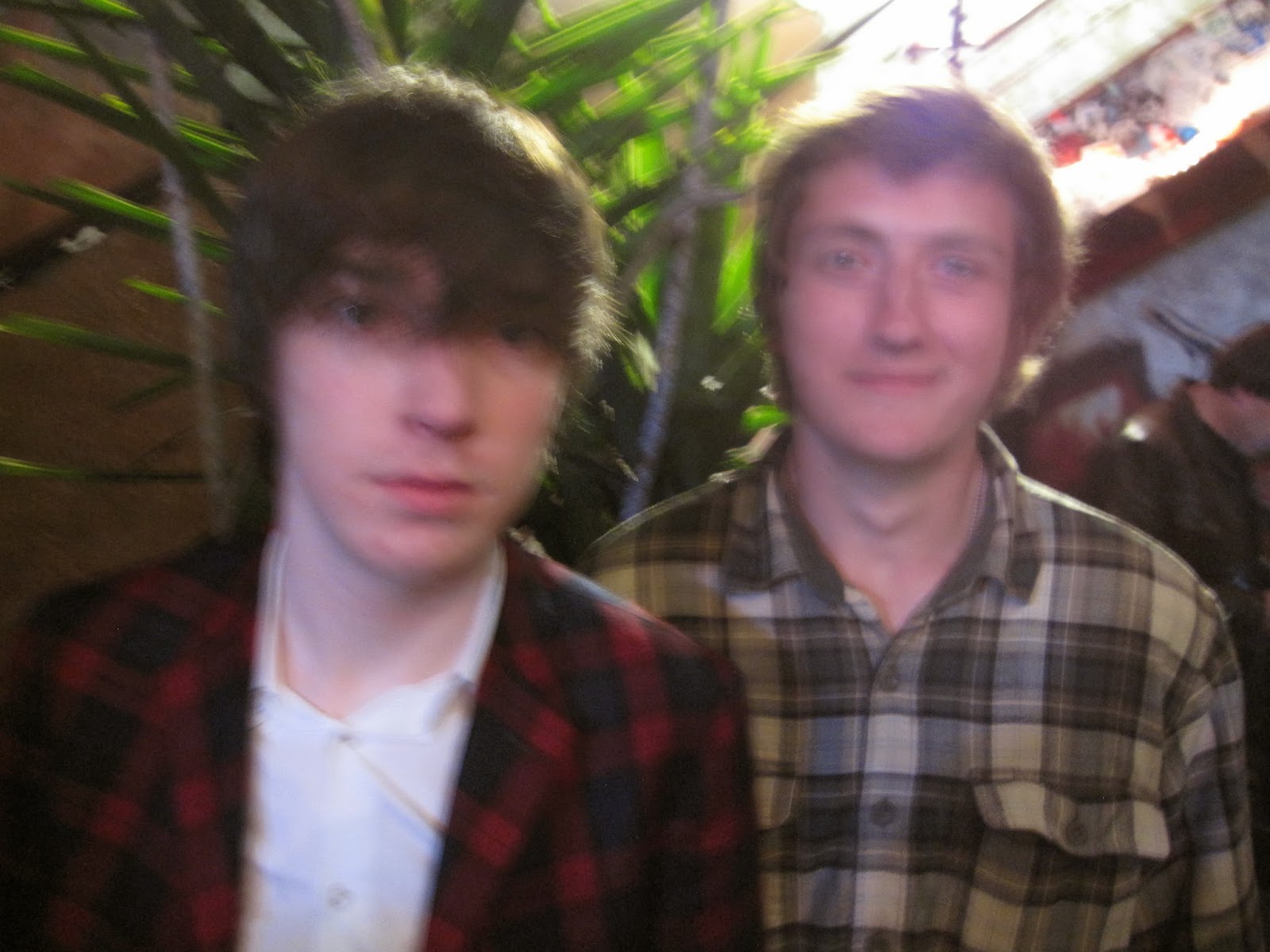 Posted by thissmallplanet at 8:51 AM No comments:
Email ThisBlogThis!Share to TwitterShare to FacebookShare to Pinterest

What The Cool Kids Are Listening To This Week (March 29, 2014 Edition)

Band of Skulls - Himalayan (LP) - Remember that song Sweet & Sour that you liked so much a couple years ago? This is that band's new album. I always like it when bands manage to produce new music that sounds like some lost treasure from 1973....

Black Lips - Underneath The Rainbow (LP) - Bubble-Garage at its best

The Hold Steady - The Bear & The Maiden Fair (single, from Game of Thrones, Season 3, You Tube), Teeth Dreams (LP), Rags (EP) - one of the top rock bands in America rears its beautiful head... How many bands feature a great, nerdy, funny, brilliant singer and TWO great guitarists (uh, three when Craig plays too)? Only one band, that's right, The Hold freakin' Steady.... They're Ba-ack.....

Stephen Malkmus & The Jicks - Wigout at Jagbags (LP) - The Pavement frontman is back with a great new album/tour with The Jicks, the fun-est working band in show business today...

The Strypes - What A Shame (live on Letterman, You Tube) - Irish teen blues-rockers extraordinaire


Posted by thissmallplanet at 8:11 AM No comments:
Email ThisBlogThis!Share to TwitterShare to FacebookShare to Pinterest 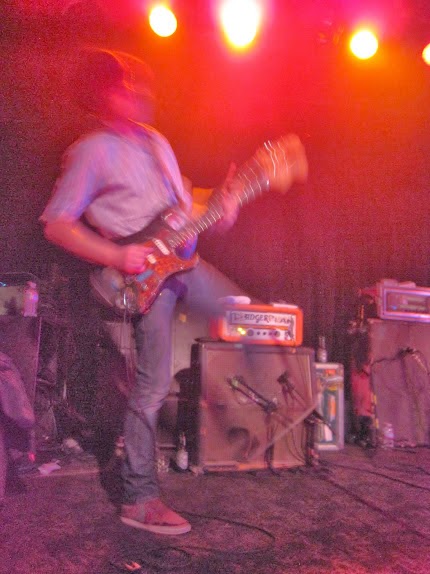 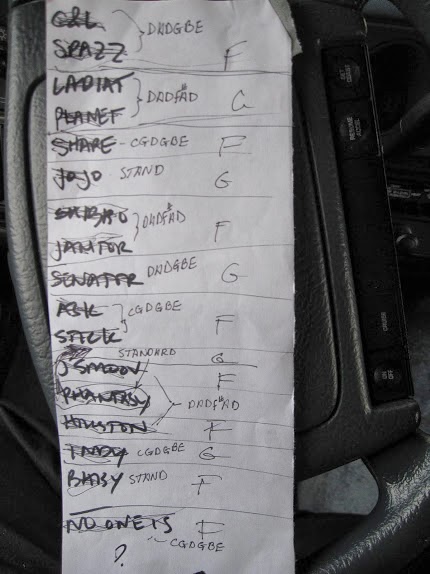 Great show! Stephen and the band in fine form....

Anyone who knows anything about indie rock already knows that Malkmus is one of the finest psychedelic guitarists around. The local rag The Bay Guardian did an article this week highlighting his clever lyrics and craftsman-like songwriting skills.

He has been fortunate enough to find (...or insightful enough to pick) some great players in both bands who could not only keep up with him but support him, challenge him, and partner with him in making some of the most sophisticated indie pop and rock ever made.

The encore was awesome, No One Is, then a spirited cover of Pavement's Stereo, followed by an excellent cover of Roxy Music's Mother of Pearl and a cool twisted version of Us.

Posted by thissmallplanet at 10:45 AM 7 comments:
Email ThisBlogThis!Share to TwitterShare to FacebookShare to Pinterest

The Strypes "What a Shame" on "Letterman"

Posted by thissmallplanet at 9:10 PM No comments:
Email ThisBlogThis!Share to TwitterShare to FacebookShare to Pinterest

Posted by thissmallplanet at 5:04 PM No comments:
Email ThisBlogThis!Share to TwitterShare to FacebookShare to Pinterest

What You Should Be Listening to RIGHT NOW!

This was a playlist for my iPod I've been tweaking for a week or so... and it turns out to be absolutely perfect - a blend of the coolest songs out now, along with a few classics....

Perhaps the best album this year that no one's heard, One Fast Move or I'm Gone, Jay Farrar's soundtrack for the film of Jack Kerouac's novel "Big Sur"... Ben Gibbard, of Death Cab and The Postal Service, helps out on a few tracks, but it is mostly a Jay Farrar affair.

The Hold Steady have a new album coming out, as well as a new covers EP... and I also threw on their cover of the Game of Thrones song The Bear and The Maiden Fair from last season.

Sun Kil Moon is a vehicle for singer-songwriter Mark Kozelek (ex-Red House Painters). I may be late to the party that declared him a genius, but I will forever grateful to Yousef Hanlati, of the excellent Portland-based blog/podcast Faces on the Radio, which you can find here: http://facesontheradio.com/
for turning me on to the brilliance of the new album Benji. Myself being of the same (Lost) Generation as Mr. Kozelek, I "get" his references only too well. He is a fucking genius. Check him out (see below).

Everyone who knows anything about indie rock already knows Stephen Malkmus (ex-Pavement) is a guitar genius. I put his new album with The Jicks Wigout at Jagbags on the playlist, along with a few select tracks by Pavement.

Oh shit, this playlist is full of geniuses (and I didn't even use iTunes Genius program to make it!)... and I'm gonna havta say that Mikal Cronin, best known as Ty Segall's bass player, but also the author of two excellent solo albums where he sings and plays guitar.

The new Black Lips album got a so-so review on Pitchfork, but I checked it out anyway, and it's pretty good! Sometimes I feel like Pitchfork makes their reviews way too personal and seem to savor tearing down golden calves (after having been involved extensively in the primary building-up of said calves) - their "thing" with M.I.A. has been particularly ridiculous... It's funny, it took me a listen or two to get into the new albums by Hold Steady, Jay Farrar, and Sun Kil Moon... but I liked the new Black Lips album right away... Decidedly garage-y and retro in sound, occasionally slipping into (delightful) bubble-garage, the songs are catchy and fun. a departure from the post-rock world music feel of their last album, and very listenable to-able do-able.

Here's The Hold Steady's The Bear & The Maiden Fair as used in Game of Thrones (spoilers if you're dumb enough to have not yet seen Season 3):

and Malkmus doing Pavement's Harness Your Heart, Stairway To Heaven, and Beginning to See The Light....

Posted by thissmallplanet at 1:37 PM No comments:
Email ThisBlogThis!Share to TwitterShare to FacebookShare to Pinterest

Posted by thissmallplanet at 1:05 PM No comments:
Email ThisBlogThis!Share to TwitterShare to FacebookShare to Pinterest

The Hold Steady, both Minnesota AND Brooklyn's answer to the question "Who will save rock n roll?" have a new album coming out called Teeth Dreams..... It's good. I didn't care for the first few things I heard from it... it sounded like The Hold Steady and it sounded good, but it didn't sound extraordinary... which is something we have come to count on from the band of always-do-wells (at music)....

But yesterday I was able to listen to the whole album, in sequence, and it just gets better and better... so by the end, there is no doubt that the boys are back, back in black, and ready to rock. We salute you, oh Hold Steady guys.....

And while you're at it, in honour of the upcoming Game of Thrones Season 4 premiere, let's raise a glass to their hearty version of The Bear and The Maiden Fair, which played over a stunning scene in an episode last season.... and a couple of other interesting videos....


Here's the boys back in January doing some acoustic stuff at a radio station... (pretty cool)....

The Hold Steady at KDHXNate Burrell

With six studio albums already under their belt and a seventh around the corner, there is no confusion about how to label these Brooklyn veterans' sound. Their tone is rugged, and timeless, and they manage to put a thousand words into a single guitar slide.  This is, in fact, "Straight up Rock & Roll."
The band might have left the amplifiers and distortion pedals in the van for this exclusive acoustic set, but none of the attitude and grittiness that define the band's sound has been lost. Craig Finn lays down some mean vocals while Tad Kubler and Steve Selvidge keep the music grounded with masterful guitar work. The sound may be stripped down from the monumental rock that you'll find on their albums, but the acoustic set packs the same punch with a much more intimate feel.
The rockers bookended this live set with songs from their last record, "Heaven Is Whenever," opening with "The Sweet Part of the City" and closing with "We Can Get Together." In between were two new songs from their upcoming album. "The Only Thing," is a love song with a tough kick to it, and "Almost Everything" is a beautiful slow jam about pretty waffle house waitresses and muffled religious conversations from the back of a movie theater.
If these songs are any indication, the new album, "Teeth Dreams," is going to be one hell of a record.
All photos by Nate Burrell

Posted by thissmallplanet at 10:52 AM No comments:
Email ThisBlogThis!Share to TwitterShare to FacebookShare to Pinterest
Newer Posts Older Posts Home
Subscribe to: Posts (Atom)