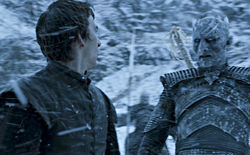 Season 6, Episode 9 - Battle Of The Bastards

But what do they mean?

Obviously the Dothraki greeting, but I imagine there will be more blood than that. I have the feeling that Loras, Margery, The High Sparrow, and Tommen are all high of the list of very probable deaths in the near future. Maybe even this episode.

Get Arya out of Essos and back to Westeros ASAP!!!

Season 6, Episode 9 - Battle Of The Bastards

John Snow vs. Ramsey Bolton - may the best man win?

Finally, what this show was all about from the beginning - Dragons Vs. Zombies... which will make all the machinations for The Iron Throne seem irrelevant. The Others, along with their Wight friends, will cross the Wall and attack Westeros proper (now that Bran has been marked; braking the magic spells in the Wall, which prevented the White Walkers from going South previously), setting up the battles for the concluding Seasons 7 and 8
Posted by thissmallplanet at 7:26 AM No comments:
Email ThisBlogThis!Share to TwitterShare to FacebookShare to Pinterest

Posted by thissmallplanet at 3:33 PM No comments:
Email ThisBlogThis!Share to TwitterShare to FacebookShare to Pinterest 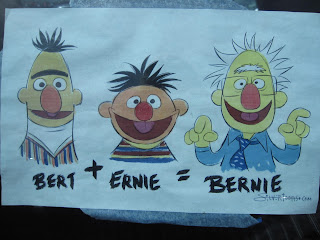 Posted by thissmallplanet at 8:50 PM No comments:
Email ThisBlogThis!Share to TwitterShare to FacebookShare to Pinterest

Posted by thissmallplanet at 12:41 PM No comments:
Email ThisBlogThis!Share to TwitterShare to FacebookShare to Pinterest

McCartney Meets 2 of The Little Rock Nine Who Inspired "Blackbird"

(Mat Hayward/Getty Images)
Posted May 1 2016 — 3:31 PM EDT
Paul McCartney met two of the women who helped inspire the Beatles’ song “Blackbird” during his tour stop in Little Rock, Arkansas, on Saturday.
Thelma Mothershed Wair and Elizabeth Eckford were members of the Little Rock Nine, a group of nine black students who enrolled at the all-white Little Rock Central High School in 1957 following the Supreme Court’s Brown v. Board of Education ruling, which declared segregation in public schools unconstitutional. The governor of Arkansas initially called in the National Guard to block the students from entering, and President Dwight D. Eisenhower sent in federal troops to escort them into the school and enforce integration.

Paul McCartney remembers ringing in 2016 with Prince
Paul McCartney plays 'Hard Day's Night' for the first time in 51 years
McCartney posed for a photo with the two women and shared it online, writing, “Incredible to meet Mrs. Thelma Mothershed Wair and Ms. Elizabeth Eckford of the Little Rock Nine — pioneers of the civil rights movement and inspiration for ‘Blackbird.’”

During the show, the rock icon introduced “Blackbird” by recalling how the Little Rock Nine and the U.S. civil rights movement inspired the iconic song.
“Way back in the 1960s, there was a lot of troubles going on over civil rights, particularly in Little Rock,” he told the crowd. “We would notice this on the news back in England, so it’s a really important place for us, because this is, to me, where civil rights started. We would see what was going on and sympathize with the people going through those struggles, and it made me want to write a song that, if it ever got back to the people going through those struggles, it might just help them a little bit, and that’s this next one.”
Watch fan-shot video of McCartney’s “Blackbird” performance in Little Rock (via Rolling Stone) below.
Posted by thissmallplanet at 2:34 PM No comments:
Email ThisBlogThis!Share to TwitterShare to FacebookShare to Pinterest
Newer Posts Older Posts Home
Subscribe to: Posts (Atom)