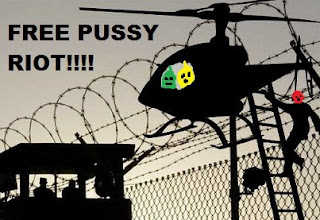 Members of the all-female Russian performance art-punk band Pussy Riot have been jailed for a performance-protest in a Moscow cathedral.

You can hear their music and read more about them here: http://newmusictoday.blogspot.com/2012/01/telegraph-uk-russian-female-punk-band.html

Posted by thissmallplanet at 1:56 PM No comments:
Email ThisBlogThis!Share to TwitterShare to FacebookShare to Pinterest

Posted by thissmallplanet at 1:37 PM No comments:
Email ThisBlogThis!Share to TwitterShare to FacebookShare to Pinterest

Yes, due to the miracle of the iPod, I carry 5,000 songs around to listen to while I'm walking or driving. The other day I put on Stephen Malkmus' 2011 Mirror Traffic, an album I liked considerably when it first came out and listened to incessantly for months. I also saw the triumphant hometown show in Portland featuring songs from the album


It had been forever since I'd listened to the album, and it was a joy to hear it again.

It made me think, for a minute, of this phenomenon of loving and living and breathing an album for a while... and then completely dropping it for something new, never to listen to it again.

But more than that, it made me remember how great Malkmus is, as a writer, singer, frontman, and, especially, guitarist.

Hope he comes back to Portland eventually after his "Berlin period".

Things I want to download right away - new albums from Wavves and The Foals, new songs from The Smith Westerns and M.I.A., an Atoms for Peace album... and I guess I will give The Strokes new album a chance, but I'm not expecting much based on the first songs we heard from it... and... that single featuring Brittany Howard and Ruby Amanfu sounds interesting....

Posted by thissmallplanet at 12:53 PM No comments:
Email ThisBlogThis!Share to TwitterShare to FacebookShare to Pinterest

Jack White has said he was always surprised that his former band The White Stripes started getting recognition after three albums.

"It was always shocking that people started caring after three albums," White told The Guardian of the band's third album 'White Blood Cells', which propelled them into the mainstream. "What, now people are getting it?! We'd assumed it was a style of music that nobody would be into and had resigned ourselves to always playing to 50 people. It was good for us, because we'd made up our minds to never care about that, and that's when success happened. It was sorta weird like that, but I think if we'd have watered it down it wouldn't have worked."

Speaking about the Mississippi blues artists that inspired him, he revealed: "As a songwriter, even if you're singing about other people or making up characters, it's still your job to be against the world and that all began in the 1920s and 1930s with these blues singers. It was the first time in history that a single person had been recorded to tell whatever story they had to the world. Before that you had to be in a German polka band with a tuba, or jazz orchestra…But suddenly anybody – they didn't even have to be good singers – could have their own voice."

Jack White was recently named as an ambassador for this year's Record Store Day, which will take place on April 20, 2013.