"Titus Andronicus may be the most ambitious punk band in America"
* * * * (4 stars) - ROLLING STONE
"It reflects the band's genuine appreciation for both punk and classic rock, a heritage equal parts the Boss and the Ramones. "
MOTHER JONES
"The magnificence here comes when a gang of Jersey punks try something big, while acknowledging how small they are."
BOSTON GLOBE
"It captures the kind of relaxed energy that defined many '80s punk acts and '90s indie bands, a mood that suits the group well. Unlike "The Monitor," this album isn't trying to be a masterpiece, and it's a much more accessible rock album as a result. "
CHICAGO RED EYE

Coming to a town near you: Local Business Forever

Titus Andronicus believe in Local Business, the concept and the many independent institutions nationwide, and as they embark on their 40+ date US tour, the band has invited fans around the country to celebrate and support local businesses in their cities.
#localbusinessforever is a call to action, a rolling series of "Local Business Days" (following, of course, the Titus tour route), celebrating the release of Titus Andronicus' new album Local Business and the vitality of local businesses nationwide. Anchored by local music venues and record stores (key local businesses for any touring band) #localbusinessforever invites you to share with the band your favorite establishments - stores, restaurants, bars, and hidden gems in your hometown - so that they can visit and patronize the best independent businesses in America, and encourage their fans to do so, as well.
When Titus hits your town, IT IS LOCAL BUSINESS DAY, so get out that day and support your favorite independent haunts in every sector. Titus Andronicus will be spending the next 6 weeks criss-crossing the US, so tell them where you think they should stop in your town, and look for the band's feedback on Twitter and this page. #localbusinessforever. Titus Andronicus think so.

Posted by thissmallplanet at 12:51 PM No comments:
Email ThisBlogThis!Share to TwitterShare to FacebookShare to Pinterest

Posted by thissmallplanet at 12:47 PM No comments:
Email ThisBlogThis!Share to TwitterShare to FacebookShare to Pinterest

Older Artists Rock Out in 2012

I'm impressed by all the cool albums coming out from older artists in their 60s and 70s these days... Bob Dylan, Van Morrison, Leonard Cohen, Neil Young, Patti Smith... Does that mean that I also can have 20 or 30 MORE active and productive years yet???

Posted by thissmallplanet at 12:46 PM No comments:
Email ThisBlogThis!Share to TwitterShare to FacebookShare to Pinterest

Jack White with The Buzzards (the guys)

Freedom At 21
Take Me With You When You Go
Seven Nation Army (White Stripes)
Portland, Oregon (Loretta Lynn cover) with The Peacocks (the girls)

Some photos and videos I shot at the show: (all rights belong to the artist)

This is "Love Interruption" done without Ruby: 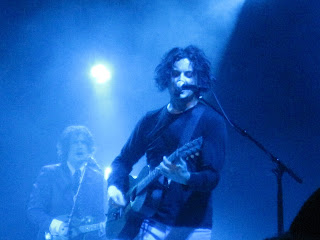 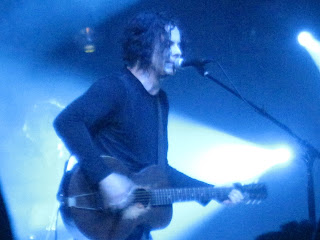 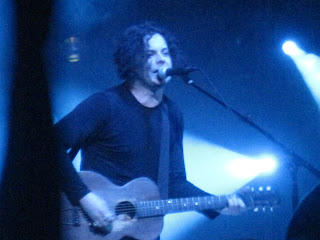 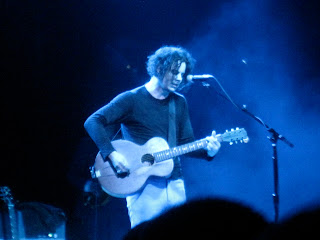 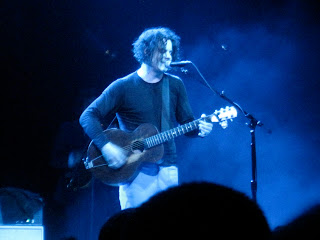 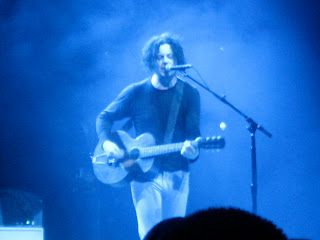 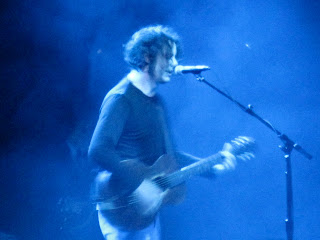 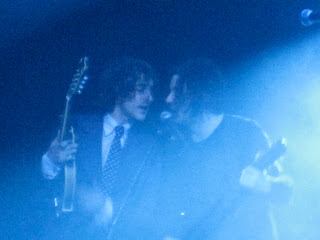 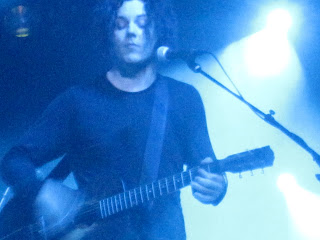 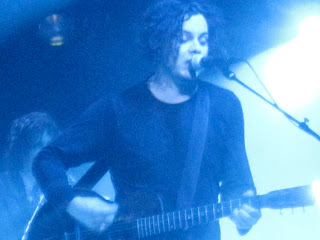 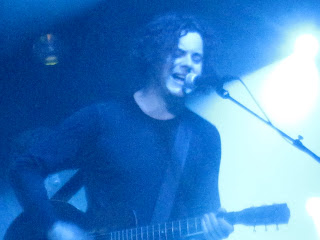 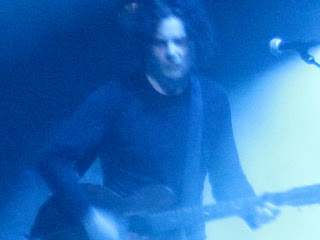 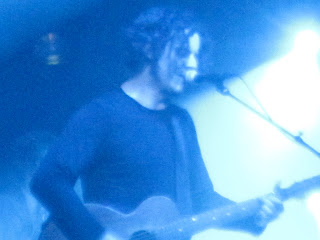 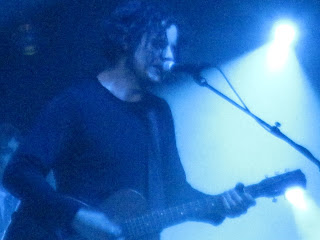 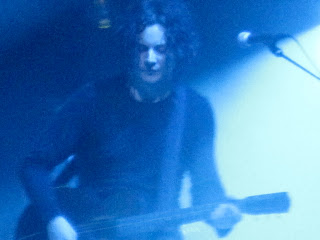 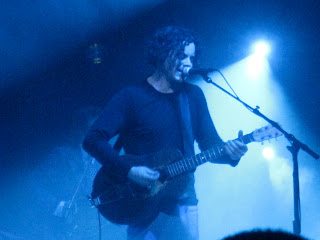 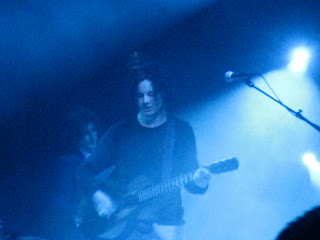 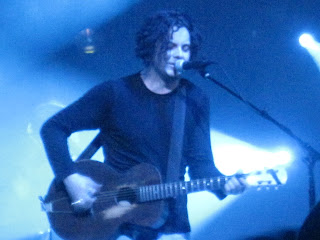 Here's "Weep Themselves to Sleep" with an awe-sum guitar solo....

The show began with this cool effect... the stage was mostly dark with an extreme angled spot light shining on jack White, creating a monstrous 30 foot Jack White shadow on the curtain behind him. 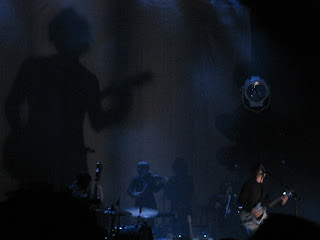 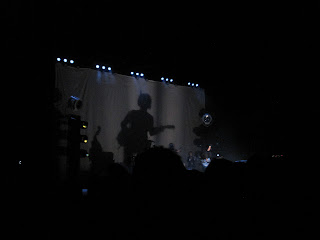 Jack seemed to be a bit off, maybe with the beginnings of a sore throat, and there was an off-kilter version early on of "Weep Themselves to Sleep", but even in the midst of chaos, you could see Jack White pulling the band together and in the end, put on a great show.

...and I have to see it's grand to see him getting to work with the big band he has always deserved and which his music often calls for. The White Stripes was, by definition, limited, being a two-piece, but that was the whole point, in a way. The Raconteurs, with two singer-guitarists, bass, keyboards, and drums, allowed a much fuller richer sound, which played well on Americana like "Carolina Drama". The Dead Weather? As much as I love The Kills' Alison Mosshart, it killed me (and I'm sure practically everyone else) to see Jack playing drums and only trotting out to the front of the stage with the guitar for 2 or 3 songs... being he is one of the greatest living guitarists and one of the greatest of all time really... I have 4 video versions that I shot of Jack and Alison duetting on "Will There Be Enough Water" that I shot in San Francisco, Coachella, Brooklyn, and Santa Fe that I would love to blend into one super-video one of these days....

But when word emerged that Jack was about to launch his solo debut album and tour, many people were understandably very excited. When we learned he was catholic enough (which we had previously learned courtesy of Stephen Colbert) to include many White Stripes songs, as well as Raconteurs, Dead Weather, and others in his new repertoire, the joy was palpable from Bangkok to Brooklyn and beyond. Some of us who had never seen The White Stripes in concert feared we would never see those songs performed live.

I caught the Sasquatch show in Washington State last May.

Here are some photos I took there (they asked us not to post videos as they were doing one in-house):

I missed the show in Eugene, but was glad I was able to see the Portland show.

It was a great show, which you know if you were there. Some of the guitar solos were breathtaking. If you weren't there, I hope these photos and videos will give you some idea of how much fun we had that night. I worship at the Church of Rock n Roll, and one of our Highest Priests this century is named Mr. Jack White... All praise him!

the end of "Broken Boy Soldier" and a blistering "The Hardest Button to Button"...


Here's the classic "Ball and Biscuit"...


Jack then brought The Peacocks (the all-female group) to do the song "Portland, Oregon", which he originally did with Loretta Lynn... here he duets with the wonderful, delightful Ruby Amanfu....