Posted by thissmallplanet at 8:01 AM No comments:
Email ThisBlogThis!Share to TwitterShare to FacebookShare to Pinterest

Patti Smith began her book reading/signing by saying she was "under the weather" and later asked the crowd if she could skip the signing part and instead do a singing part... to the delight of the crowd. Accompanied by her bassist Tony (here playing an acoustic guitar), she sang some powerful numbers, especially for someone 66 years old and "under the weather". 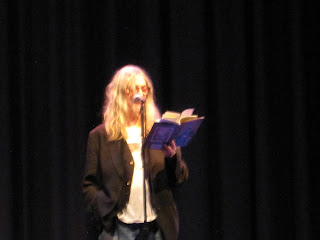 Singing such classics as "Dancing Barefoot" and "Because The Night", she also dedicated "Beneath The Southern Cross" to the victims of last weekend's Paris tragedy.


Before the songs, she read selected passages from the book and did a Q&A: