Wow! Got some awesome festivals coming up this summer (and Fall)...

The first is Bob Dylan, playing in select cities with Wilco and My Morning Jacket... 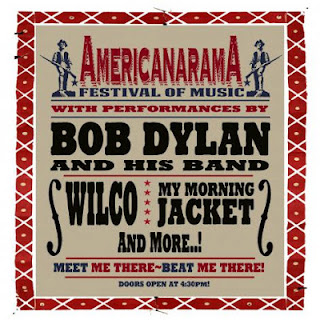 A few lucky cities get to also see Richard Thompson open the event... We have to assume each artist will do complete sets of their own. Still.... the possibility of Jim James or Jeff Tweedy dueting with Dylan is tantalizing indeed! (The closest this comes to Portland is the August 4th showing in Northern California at Shoreline...)

Clic here for more info on the Dylan/Wilco/MyMorningJacket Americanarama Festival of Music...

The so-called First City Festival in Monterey, California in late August has an impressive line-up, feat Modest Mouse, MGMT, and The Hold Steady... 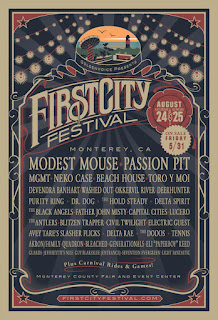 And San Francisco's Treasure Island Festival in October promises to be one of the premiere West Coast events for Fall 2013... another chance to see one of the UK's best-est new bands Palma Violets on the rise... and the interesting Thom Yorke/Flea project Atoms for Peace, Diplo's Major Lazer, and many others...

Posted by thissmallplanet at 1:11 PM No comments:
Email ThisBlogThis!Share to TwitterShare to FacebookShare to Pinterest

We can work it out … Paul McCartney performs in Orlando, US, on 18 May, during the first US concert of his Out There tour. Photograph: John Raoux/AP
Paul McCartney has protested to the Russian government about the treatment of the members of Pussy Riot, after it emerged Maria Alyokhina has gone on hunger strike in prison after being refused the right to attend her own parole hearing.

Now McCartney has written to Russian officials, urging them to reconsider the jailing of Alyokhina and bandmate Nadezhda Tolokonnikova, asking them to remember the country's "great tradition of fair-mindedness". In the letter concerning Alyokhina, McCartney writes: "My personal belief is that further incarceration for Maria will be harmful for her and the situation as a whole, which, of course, is being watched by people all over the world. In the great tradition of fair-mindedness which the Russian people (many of whom are my friends) are famous for, I believe that you granting this request would send a very positive message to all the people who have followed this case."

In a separate letter regarding Tolokonnikova, who last month was denied parole, he writes: "I have had a long relationship with the Russian people, and, with this in mind, I am making the following request in a spirit of friendship for my many Russian acquaintances who, like me, believe in treating people – all people – with compassion and kindness."

Tolokonnikova and Alyokhina were jailed for two years in August 2012 for breach of the public order motivated by religious hatred after staging their now infamous "punk prayer" protest against Vladimir Putin in Moscow's Cathedral of Christ the Saviour in February 2012. A third woman, Yekaterina Samutsevich, was released last October after being given a suspended sentence.
Posted by thissmallplanet at 5:31 AM No comments:
Email ThisBlogThis!Share to TwitterShare to FacebookShare to Pinterest

Last night in Ventura, California (USA), Arctic Monkeys debuted a new song from their forthcoming fifth album, which fans are calling AM5.

It's called "Do I Wanna Know" and it's pretty frreakin' cool....

Thanks to superfan Anna Garcia for the heads up on this. Told her yesterday she puts the "fan" in fanatic.... 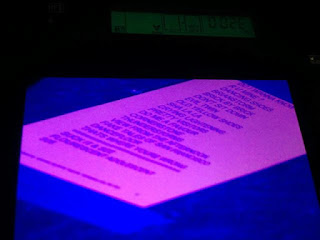 Posted by thissmallplanet at 4:41 AM No comments:
Email ThisBlogThis!Share to TwitterShare to FacebookShare to Pinterest

Posted by thissmallplanet at 3:21 PM No comments:
Email ThisBlogThis!Share to TwitterShare to FacebookShare to Pinterest

Grant Hart, former drummer and one of the two singer-songwriters in seminal punk band Husker Du, has some brand new stuff and it's pretty damned great!

The Argument, a double-album, said to be inspired by William Burroughs AND John Milton's Paradise Lost?!?!?...

Talk about high concept! I'm suddenly impressed in a way I haven't been since I heard Titus Andronicus was doing a "concept album" about the U.S. Civil War, feat. soundbites by Walt Whitman and Abraham Lincoln.

Grant is on Domino Records, the UK indie powerhouse best known for releasing all of Arctic Monkeys' work.

You can take a listen to some of Grant's new songs here...


Posted by thissmallplanet at 7:29 AM No comments:
Email ThisBlogThis!Share to TwitterShare to FacebookShare to Pinterest 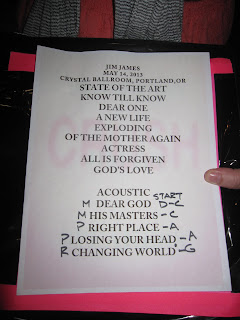 THE GOSPEL ACCORDING TO JIM JAMES

Jim James of My Morning Jacket performed at the Crystal Ballroom in Portland, Oregon on May 14, 2013.

Many people still think of Kentucky-based My Morning Jacket in terms of alt-country rock, Americana, roots music, but they are increasingly apt to experiment with soul, jazz, R&B, Motown, and world music sounds.

Leonine leader Jim James has stepped out on his own, sometimes under the monicker Yim Yames, on such instant classics as 2009's Tribute To... (George Harrison) and as part of the supergroups Monsters of Folk (with M. Ward and Bright Eyes' Conor Oberst and Mike Moggis) and New Multitudes (Jay Farrar's Woody Guthrie project).

He recently released his first solo album and is touring with a very strong road band, performing songs from the solo album, as well as other material, such as Woody Guthrie's "Changing World".

The solo album can best be described as "indie soul", and the gospel music played before the show helped set the tone for the show. Opening act Cold Specks put on a great set. Very impressive.

Jim James and band took the stage and the good news is, the material rocked a lot harder in concert than on the record. Everyone in the band is great, and Jim was in fine form, singing, playing guitar, and sax, moving around the stage like an uncaged panther.

Some of these videos are a bit dark, but the later ones seem better.


Posted by thissmallplanet at 3:02 PM No comments:
Email ThisBlogThis!Share to TwitterShare to FacebookShare to Pinterest

Billy Hayes, best known as a drummer for Jay Reatard and Wavves, is actually a multi-instrumentalist who is also a singer and composer (he wrote a couple of Wavves' coolest songs). He's been active but keeping a lower profile lately back home, but that's about to change.

His new project, Cretin Stompers, has a new debut LP Looking Forward To Being Attacked coming out in the Fall...